I am starting a new series of articles discussing what I believe to be some of the most essential hip hop/rap albums of the 2000's.

I have chosen five albums for every year starting with 2000 and will work my way up to where we are now..possibly followed by a series that explores the 90's and furthermore the 80's/70's. For those of you that desire to become a master in this genre or are just looking to get educated and/or find some great rap/hip hop to listen to then stay tuned for our journey begins here...and the most influential album of the year 2000 is... 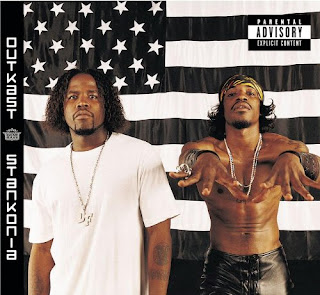 A large portion of the wider public audience mistook this for Outkast Debut LP. Those of us lucky enough to be up on the funky etherael duo already knew they had three classics under their belt with Southerplayisticcaddillacmuzik, Atliens, and Aquemini. As original, funky and catchy as the three previous albums were...the world had not prepared itself for the three collosial singles they would unleash that would make them a household name. If the energetic futuristic beat and flows of B.O.B. didn't make you wanna hit the gym or jus in general get up and move, then the dope beat and silky smooth crooning of Sleepy Brown on So Fresh So Clean(Which i am willing to bet is still qouted by someone somewhere fresh out the shower once a day) had your head nodding whilst feeling like the "coolest mothafonka on the planet".

And then of course in between the two aforementioned singles was the deal sealer that everyone from your grandmother to your four year old nephew was singing along with...Ms. Jackson. This is track much like the album is a masterpiece of perfection with the infectious hook the melancholy yet hopeful instrumental and the show stealing Andre 3000 verse (forever..forever ever..forever ever?)sandwhiched in between two great rapid fire verses from Big Boi about a failed relationship and ensuing custody battle.

In today's Rap scene where nearly every big hit is about sex, drugs or how much of a boss one is, Outkast managed to make major hits apologizing to an Exs mother for a failed relationship and the drama that came from it, Having good hygeine and an electric dance track that includes the refrain "Bible Music Electric Revival"....oh and did I mention the rest of the album?!!

Every track is nearly as mind-blowingly original and re-playable as the singles which a strong case can be made that most could've been released as such and still been serviceable. for instance after the mysterious intro we get Gasoline Dreams which ignites the album with an overdose of energy you may mistake for just a hype rap track unless you pay attention to the socio-political lyrics of the song about crooked cops and the failed system. You also have great songs such as I'll Call Before I Come with it's double entrendre hook that I was embarrassed to learn the true meaning of as as a child; We Luv Deez Hoez, with which such a basic overused subject matter/trope one would assume to be some music for girls to twerk to...is actually a laid-back track with a pimp-ish electric guitar riff(There hasn't been such a thing since Hendrix right?) and straight up classic guest verses from the Dungeon Family bretheren, namely Big Gipp who begins his verse with a variety of titles he claims (I'm mr..... etc etc).

Nearing the albums end we still have Red Velvet(A morality tale about the dangers of living a flashy braggidicious lifestyle), Gangsta Shit(A gigantic Possie cut with a thumping beat sure to get you hype and a little out of character for the later Outkast, though Andre stays true to himself rapping about playing the guitar and singing the sweetest melodies a bitch ever heard), Slum Beautiful(A beautiful song dedicated to the appreciation of women in all their beauty which Cee-Lo of Goodie Mob gets a highlight on coming in with a warm and intimate verse placed perfectly in the track) and Toilet Tisha (A tear jerking track dealing with teenage pregnancy and suicide, also foreshadowing the direction Andre would be headed in for his Solo disc and featuring Spoken Word by Big Boi)...
Outkast and production team Organized Noise truly went all out on this one...and It feels effortless...it doesn't feel like they spent days n days revising n going "oh this has to be perfect, this must all fall this way, we must do this to make this moment here epic"...instead it just feels like they threw it together one hundred miles an hour and came out light years ahead of everyone else..and for that reason I'd have to say this is one of if not the most essential/influential, not only hip hop but any genres.. albums of the year 2000/All Time.